Posted on March 4, 2013 by individuallyiced

Making a Number One Cake

Rather than having to hire baking tins, I try where-ever possible to find ways to either make my own from catering grade foil and moulds, or sculpting the shape from whole cakes. This is what I did when a customer wanted a cake for her daughter’s 1st birthday.

She wanted a cake which was pink & glittery, with loads of white and silver stars, in the shape of a large number one.

I cut out the stars first to give them time to dry so I could paint some of them silver – edible silver paint really is the only way to get silver – if you try to mix the colour in sugarpaste you will only end up with varying shades of grey!

As her daughter’s nickname was Livvy-Bea, she also wanted a large edible bumble bee on the cake…..using a heart cutter I made the wings from flower paste so I could roll them quite fine, but they would harden enough to stand on their own when inserted into the bee. I cut out a large heart shape, then used the same cutter to make a “wing-shape”. I cut out two and again left them to dry & harden.

Then I mixed some bright yellow sugar paste which I rolled into an egg shape, which I put a smiley face into – I filled the eyes with black sugarpaste and made a smiley mouth from white sugarpaste. I then added some black stripes, and made two antennae which I left to dry overnight then inserted above the eyes.

While the “bee” was still soft I made two deep splits in the back & inserted the hardened wings, pushing the paste gently back together to seal them in. Don’t be tempted to use too much edible glue to secure the wings as it tends to soften them, and they will break off.

As for making the number cake, I used an 8” square cake, so used an 8” square piece of paper, which I drew the portions of the cake so I could experiment with sizes to get the best fit from the cake, with the least waste. I then cut out the pieces and placed them on the cake board – this is a really good way of ensuring the end result will fit.

I split the whole cake to fill it – don’t use too much filling or it will squash out with the weight of the icing and make the sides bulge. To make sure you put the top back on correctly, mark one side – I used edible pen – it will be hidden when you ice the cake but is another tip for putting it back correctly.

I trimmed the cake top slightly to level it, but I tend to turn the cake over and use the base as the top, because it is much flatter. You can then fill any gaps around the base of the cake with buttercream when it is on the cake board. 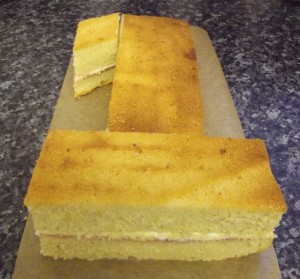 The final cake was iced in “Barbie-pink” icing with white & silver stars and loads of edible glitter, before finally positioning the bumble bee and adding the message.